*Note: This post was first published on May 28, 2020 as part of our original CH Data Lab site.

Our recent experiment – a simple list of the top 25 works in Carnegie Hall’s history – provides a 10,000-foot summary of which works have been performed most often at the Hall over the past 129 years. It’s intriguing, but in some ways the list raises more questions than it answers. We’d like to peel back a few layers to see what we can find if we descend for a closer, ground-level view, since such a broad overview obscures the fluctuations in programming choices and musical tastes happening within each generation.

Let’s start by simply glancing down the list. Most of the works reflect expectations of a venue known for its classical repertoire– heavy doses of Beethoven, Brahms, and Chopin – but there are a few surprises. Who would’ve thought that The Star-Spangled Banner would claim top honors? The presence of two Wagner overtures might also seem strange to anyone not intimately familiar with the larger sweep of Carnegie Hall concert programs since 1891. By slicing up the time frame into smaller chunks we can begin to understand how such pieces have been able to claim such high positions on the Carnegie Hall charts.

First, how about our national anthem? Americans are used to hearing it at nearly every sporting event (and, if you’re sitting in the stadium, most likely singing it, too), and it probably also brings to mind things like the annual July 4th concert by the Boston Pops (or by your city band at the local bandshell), or perhaps school band and orchestra concerts. But when was the last time you heard it at a Carnegie Hall concert? The answer, for most typical concert goers, would be never, or at best rarely, at least in recent years – since graduation ceremonies predominate. This chart helps explain the mystery (and sets the stage for us to tackle the Wagner question as well): 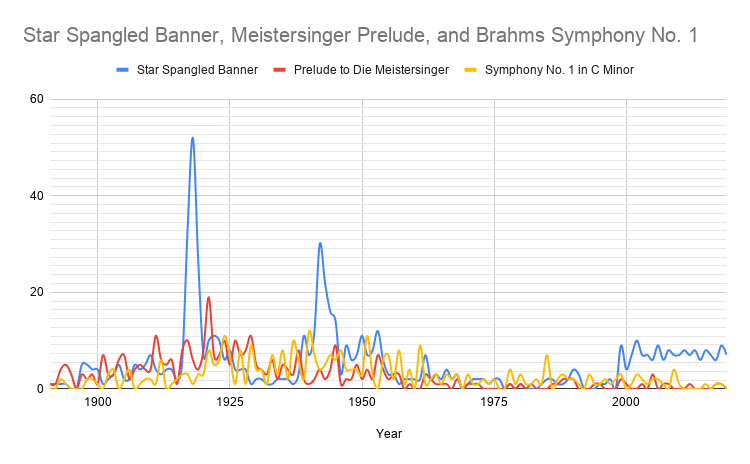 Right away you’ll notice some spikes in performances of The Star-Spangled Banner in 1918, 1942, 1953, 1962, and 2002. The reasons for several of these peaks are obvious: 1918 and 1942 occurred during wartime, when patriotism would run particularly high, as would 2002, following the September 11, 2001 terrorist attacks. What about 1953 and 1962? Identifying the real reason is probably pure speculation, but several events and trends from 1953 may have played a role: the end of the Korean War; the inauguration of Dwight D. Eisenhower as President; and the continuing effects of McCarthyism and the Red Scare, then at its height (Ethel and Julius Rosenberg were executed as Soviet spies in 1953). The most obvious event to spur some national pride from 1962 would probably be John Glenn becoming the first American to orbit Earth – at the height of the Cold War, Glenn’s achievement made him a national hero when the country needed some good news in the space race with the Soviet Union.

Some additional context is needed here, though: while The Star-Spangled Banner may have been performed more than any other single work at these times, this isn’t necessarily an indication that it was more popular than other pieces. Think of this: how many people can even name the composer of the Banner? Most people would say Francis Scott Key, who indeed penned the lyrics, but the tune was composed by a British church organist named John Stafford Smith. But if not for the fact that his “Anacreontic Song” (Anacreon was a Greek poet known for his drinking and love songs) was chosen to carry Scott Key’s words, we’d mostly likely never hear anything by Smith. (In fact, exactly one other tune by him was performed at the Hall, once! The other composers in these most-performed lists (Beethoven, Chopin, etc.) wrote dozens, if not hundreds of works, so examining who the top composers* were during these times reveals more:

It seems nobody can knock Chopin off his perch (and 1947 was a banner year – no pun intended!), and several other trends are interesting: the ascendancy of Bach; the descendancy of Wagner; the waxing and waning of Tchaikovsky; the later appearance of Mozart and Debussy. After World War I, poor John Stafford Smith makes the top 10 only once, in 1942, just after the United States entered World War II.

There’s still a lot more that could be said about these trends. Were there other cultural developments driving these tastes? For example, advancements in recording technology and playback media almost certainly had an effect. What does an examination of the performers themselves tell us? In the pre-television era, certain classical music icons like Leopold Stokowski and Arturo Toscanini wielded quite a bit of power as taste makers. Even as rock and roll was reshaping American popular music in the mid-1950s, wunderkind Leonard Bernstein molded a generation of young listeners through his televised Young People’s Concerts with the New York Philharmonic. And while few classical performers could inspire as much devotion today, when the announcement in 1965 that pianist Vladimir Horowitz was returning to Carnegie Hall after a 12-year hiatus caused lines of hopeful ticket buyers wrapped around the block, it’s not hard to imagine the strength of his influence on listening tastes. To do your own deep dive, visit our Performance History Search, or flex your SPARQL chops on our SPARQL query interface.

*If you’d like to try this yourself, you can run the following query on data.carnegiehall.org/sparql -- simply change the year in the FILTER statement to try different years.